King street ends in a square on the banks of the river Nidelva called Kongensgateallmenning (map), which can be translated as "gate of the Royal street." (Another name - Rådhusallmenningen). Area among the warehouses at the port appeared after a fire in 1681. Military engineer Johan Caspar von Cision, who headed the restoration of the city, took all measures to avoid future such disasters. Developed the project provided wide streets, impeding the spread of fire, and convenient access to the water.

Central part of the city is almost completely surrounded by water - on the North, the expanses of the Trondheim fjord, with the other three sides carries water river Nidelva doing before falling into a steep zigzag, leaving to communicate with the mainland by a narrow isthmus. The original name of the city was Nidaros, that is, "the mouth of Nida". In the late middle ages the town's name was changed to Trondheim - so called this area lived here tribes. In 1930, the restored ancient name of Nidaros, but after the protest of the people already in the following, 1931, the city again became a city. 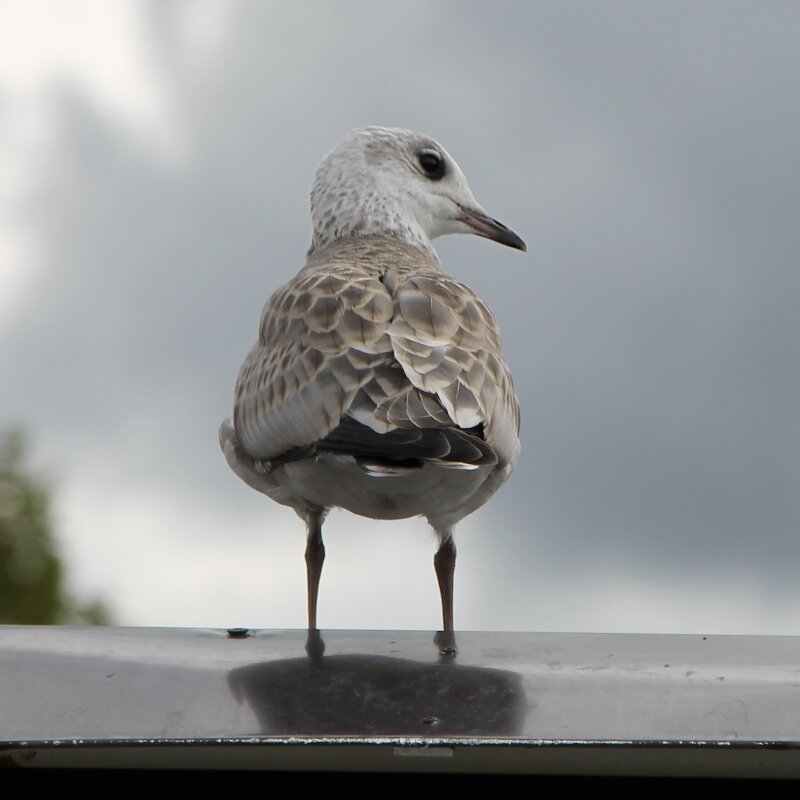 When the quays of the port of Trondheim were drawn along the mouth of Nidelva, and these buildings are port warehouses. Broad street Kjøpmannsgata was built after the Great fire as firebreaks separating the port from residential areas. The street consists of two levels separated by a green presudom. This decision saved the port warehouses - the backbone of the economy of the city, from urban fires 1708 and 1841 years. in 1845 the green band in the middle of the street planted with tall trees, which were living wall from sparks.

Over time, the street became the main city. The right side was built up public buildings. The building of the Association of artisans (Håndverkerforeningen map) appeared after the fire in 1898 that wiped out the entire quarter, including the majestic Civil society building. The construction by architect Lars Solberg and Johanna Christensen ended in 1900, when the building was opened the city's first public library. 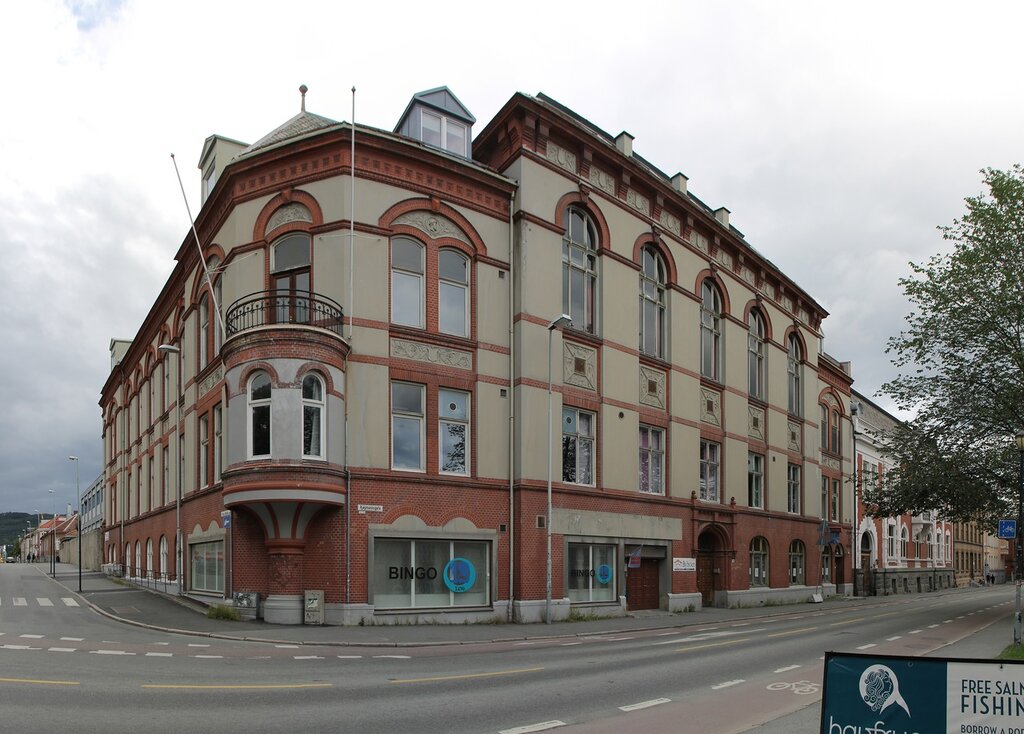 multi-storey warehouses, a typical port structures in the early 18th century. The wooden building had a special design - the façade facing the river was equipped with large openings on each floor and lifting winch, loading and unloading of goods on calling directly to the wall of the warehouse court. this building was built on piles to the quay wall was over a deep place of the river. The front facade was placed stalls. Later, the port moved to the shore of the fjord, and warehouses for a long time empty. In 1930, the city architect Sverre Pedersen proposed to reconstruct the old warehouses for residential homes.

I don't think the bike was stolen - most likely the owner lost the key to the lock. 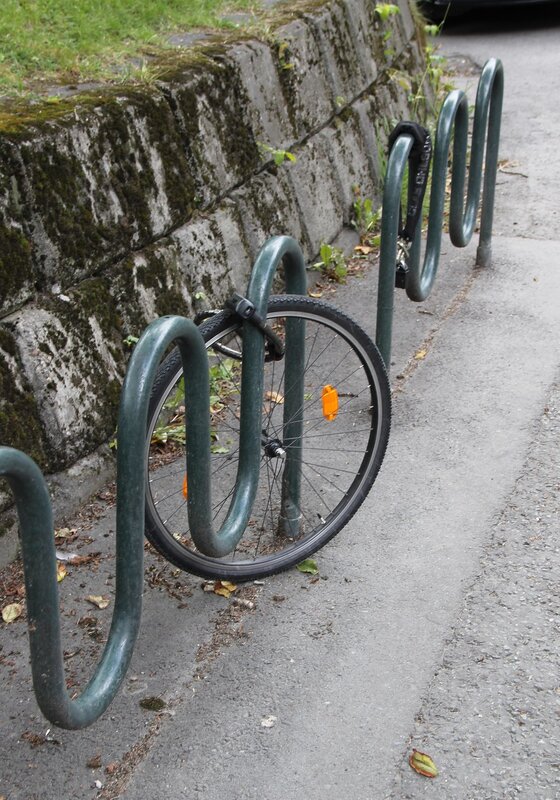 At the end of the street is the Home of Thomas Angells (Thomas Angells Hus) map), a major Norwegian merchant-philanthropist. You might think that luxurious mansion was the residence of the entrepreneur, but in fact this building was built with funds created Fund in 1772 as a residential complex for elderly widows. The building is built on the site of the Dominican monastery, and therefore it became known as "the monastery". Now it is a state pension, which includes 50 small apartments, a library, a chapel, a large recreation yard.

in front of the building is a monument to the benefactor. 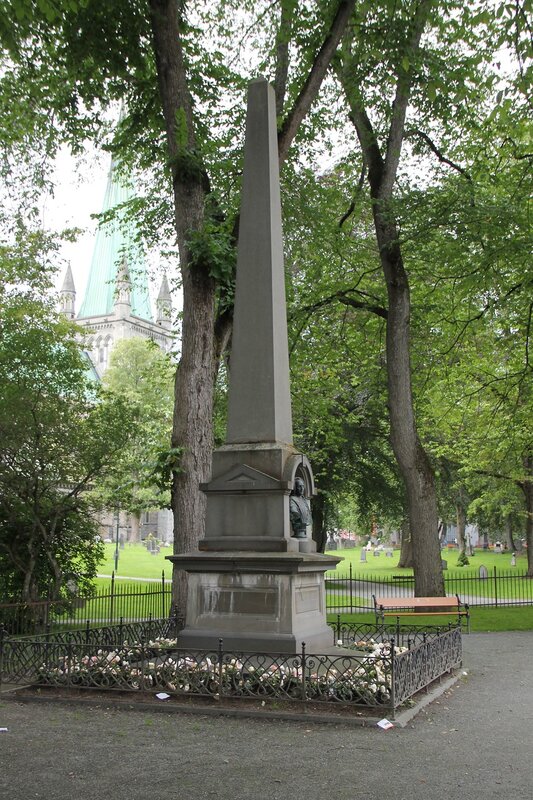 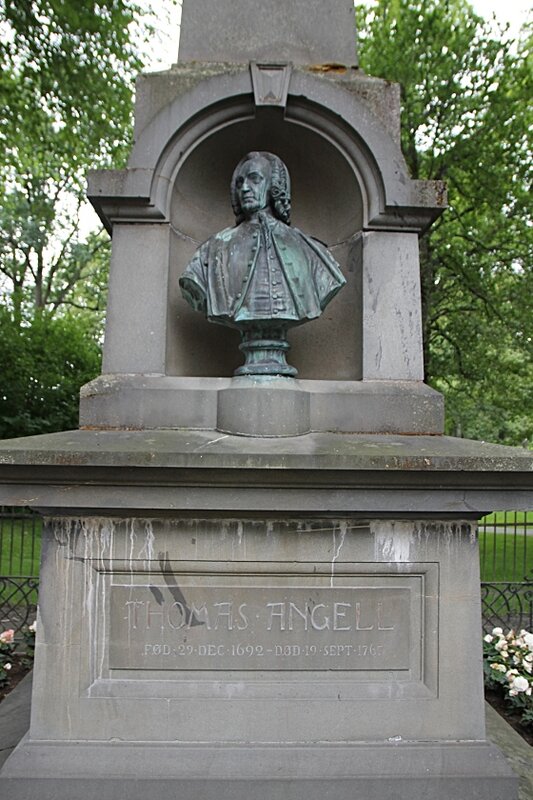